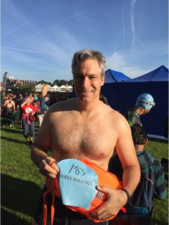 Crispin is a self-proclaimed recovering journalist who is still drawn to communicating the human experience for the greater good all around the world. He also humbly describes himself as “a mid-life crisis marathon swimmer” who is “average at best,” and “has the habit of setting himself crazy goals from a position of complete ignorance.” He has lived and worked throughout the Middle East, Southeast Asia, London, and Northern Ireland, reporting for 20+ countries on four continents throughout five international conflicts.

He admitted that the 45 km long “20 Bridges is the most challenging swim that I have ever attempted. I am excited and apprehensive in equal measure but am extremely motivated to swim around Manhattan. I travel a lot for work and have trained for this challenge in Abu Dhabi, Russia, the UK, the Netherlands, Canada, and Ireland. I love swimming around islands – and spent hours swimming around Sandycove Island in Cork in July during Cork Distance Week. I expect fewer jellyfish and goats in New York, but am ready for all sorts of surprises in and beside the water!” He also recruited a super-international crew to support him during the ten hours and eighteen minutes of the swim. The icing on the cake was that his 45th birthday came a couple of days after the swim date and he was “hoping for a good result to get the best birthday present ever!”

The day was extra special as he was able to make more people aware of secondary breast cancer and raise over £4000 for Secondary 1st, which was established in memory of his dear friend Rosie Choueka.