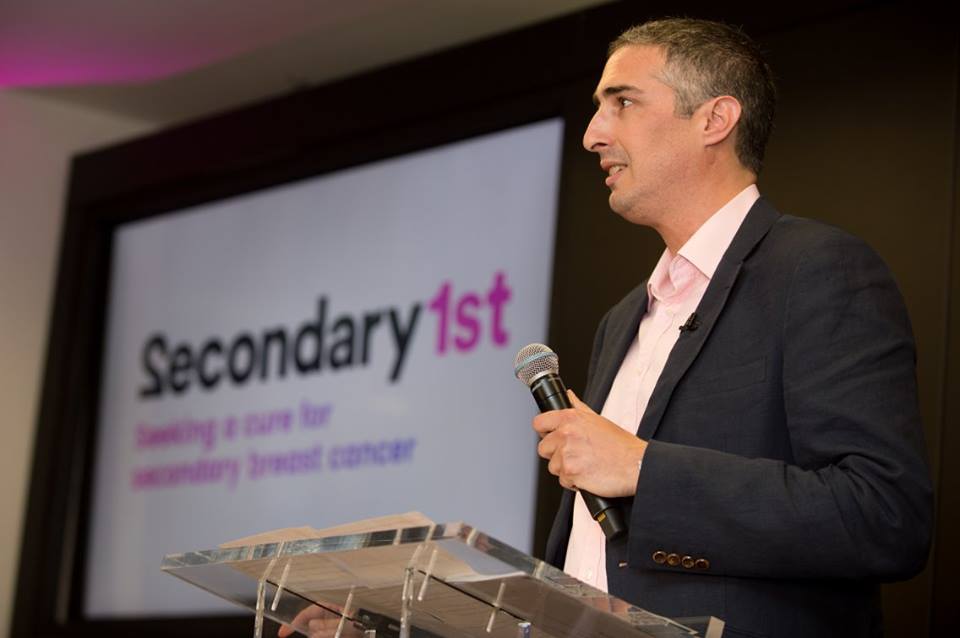 What a couple of days it has been for Secondary1st.  The charity launched officially on Tuesday evening at a wonderful event at Bristows in central London.  Some two hundred people joined Rosie Choueka’s family, to celebrate the founding of this major new charity.

Pat Treacy, a trustee of Secondary1st, introduced the charity. She and Rosie were partners at Bristows. Pat says over the years the links between the law firm and Secondary1st will continue to strengthen.

“Rosie was an inspiration, I came to admire her very, very greatly,” she said.  “I hope to act as an indelible and enduring link between Bristows and Secondary1st.”

During an often emotional evening Elliot, Rosie’s husband, explained that the establishment of the charity was one of Rosie’s last wishes as she was dying of secondary breast cancer.  The charity established in her memory will fund research into a cure for this devastating disease.

Rosie and Elliot’s 8-year old daughter, Natalie, said in her speech, ”don’t let this happen to anyone else’s mummy.”

Those present also heard from the patron of the charity, the actor Peter Capaldi, in a video message.  The current Doctor Who called on everyone to stop and think about secondary breast cancer.

“In the UK one thousand women die from secondary breast cancer every month. And that’s why Secondary1st has been established. To raise awareness, understanding and funds. I’m happy to be the patron of Secondary1st and help make this something we can all fight together.”

In a heartfelt speech, charity trustee Craig Fisher spoke about watching one of his closest friends die of cancer.  “This is not a disease that only affects women.  Man or woman – we are all in this together. We are all fighting together. We all hurt together, we are all angry together and we all cry……together.”

Tuesday night was a very special moment but it is only the beginning.  Now the hard work begins.

Laurence Kalman, Rosie’s brother, closed the evening by thanking everyone who has selflessly contributed their time and resources to make Secondary1st happen, including the medical patrons and Bristows. In the year ahead, there are many plans to raise funds and awareness.

We have received many donations in our first week, but of course we want more!  Every single penny that is donated will be given to Breast Cancer Now to fund the research of Professor Andrew Tutt at the Institute of Cancer Research. Professor Tutt’s work focuses on triple negative breast cancer, a particularly aggressive form of the disease that 7,500 women in the UK are diagnosed with every year.

So please do dig deep and give whatever you can.  It’s easy to donate via our website.