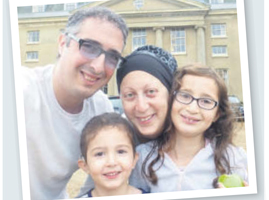 Dad takes on cancer that took his wife

This interview by Claire O’Reilly first appeared in The Sun on 12th July in the ‘me’ supplement.

ELLIOT Choueka has launched the UK’s first charity to fund research into secondary breast cancer after losing wife Rosie, 38, in June last year. Secondary breast cancer is when cancer spreads to other areas of the body, and is always terminal. Here Londoner Elliot, who is now raising children Natalie, eight, and Joseph, five, alone, tells CLARE O’REILLY about Rosie and charity Secondary1st.

Rosie was perfect. Beautiful, smart, a brilliant wife, an amazing mother and an incredible lawyer. Honestly, she was the kind of woman you
wanted to hate until you got to know her.

We married in October 2004. In June 2014, Rosie found a lump in her left breast. Her mum, Maralyn, had beaten cancer in 2009 and Rosie was incredibly breast aware. After a biopsy and ultrasound we were given the diagnosis that it was cancer.

The surgeon suggested a lumpectomy followed by chemo, which Rosie finished in November. Five days after she finished it, Rosie found another lump in her breast. Tests confirmed it was secondary breast cancer. She started another course of chemo but had to take a break towards the end as her blood count had dropped so low.

We decided to go on holiday to Israel during the break. Rosie fell ill within a day or so of going on holiday. She swore it was a stomach bug.

She had a consultant appointment the day after we got back and she was admitted the next day and put on a morphine drip instantly. She must have been in agony during the holiday and on the flight.

A few days after she was admitted, she texted me at 6am asking me to come to the hospital. It was Friday morning and it was the last time I left her side. The following Friday she was transferred to a hospice in Hampstead, not far from where we’d had our very first date. In the ambulance on the way over I joked about “us” starting and ending in Hampstead. It seemed a fitting and a poetic ending.

The children came to see her on the Friday and said goodbye. On the following Tuesday, I phoned Natalie from the hospice to wish her a good day at school. She asked me to give mummy a kiss for her. I did and five minutes later Rosie passed away.

Rosie had asked me a few days before she died to start a charity focusing on secondary breast cancer.

Every woman who develops it dies from it and while there have been great gains in breast cancer research, very little of it has focused on secondary breast cancer which kills 1,000 women in the UK every month.

It seemed a fitting legacy.